These are notes I jotted down while watching Joe Biden debate Sarah Palin tonight:

A couple of weeks ago, I posted some 3D renderings of some Lego chess pieces I had made. Since then, I bought the book Virtual LEGO and installed more of the LDraw suite of Lego CAD programs under Wine on my Ubuntu laptop. I've been playing with rendering better versions of the pieces.

My latest attempt (go see!) is large and almost photorealistic; you can even see the brand name LEGO on each stud. How studly is that?

p.s. As I thought it might be, LEGO and LDraw are proving an easy and interesting avenue into the world of 3D rendering with POV-Ray and such. Next up: getting a foothold in robotics through LEGO Mindstorms.

Part of my recent Legomania is due to our considering including some games that use Lego as components in Games Unboxed. Clark and I determined that Legos are "ordinary components" because nearly everyone has some, especially if they have kids. Lego brick designs are in the public domain because Lego's patents have expired, and there are many compatible clone brands. I'm happy to see there are even web forums devoted entirely to Lego clones (forum 1, forum 2, forum 3). Open-source Legos!

Not only that, but there are now intersystem protocols for connecting Legos and clone brands with other kinds of building toy systems, such as K'nex, which are a hub-and-spoke system like Tinkertoys. For example, there was a patented toy called Sploids (now defunct) that connected Lego and K'nex; these days, K'nex makes its own Lego-compatible bricks.

Thus, I see Lego and the like not only as a toy system and as "ordinary equipment", but as a highly flexible game system, and I'm trying to prove it by showing that you can play almost any chess variant with a Lego set. I'm also in the early stages of work on some of my own games using Lego as components, but more about that later.

OK, I CADed and rendered all the chess and chess variant pieces I've built so far.

You saw the pawn in my last post. Here it is again, ministered to by the Bishop, who looks somewhat similar, except for his white mitre, which ought to work on both red and black pieces. 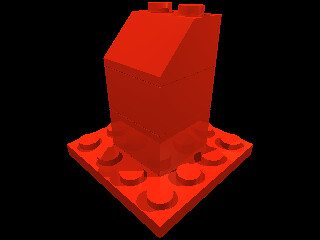 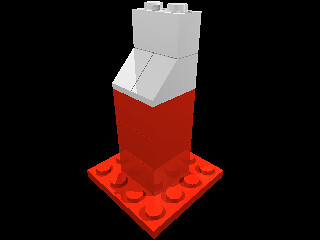 Next, the Rook and the Knight. The Rook is one of my favorites. 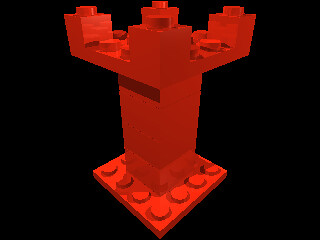 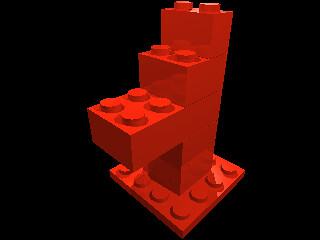 Here are the King and Queen, with "gold" and "silver" crowns, respectively. The closest you can come in a Lego set is usually yellow and white. Yes, the King is less powerful than the Queen, but he's more important to the game, so he gets the gold and the Queen gets the silver. Otherwise, the pieces are built identically. 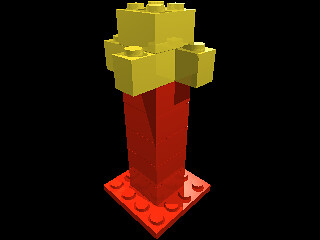 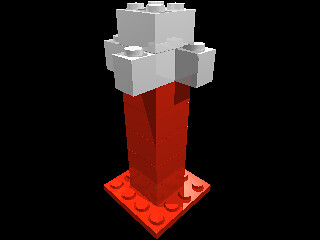 And that's it for my standard Chess pieces.

The chess variant Capablanca Chess, developed by the Grand Master Jose Raul Capablanca in the 20th century, includes two new pieces: the Archbishop and the Chancellor. Just as the Queen combines the moves of the Bishop and the Rook, the Archbishop combines the moves of the Bishop and the Knight. I built it to look like a meld of those pieces. Similarly, the Chancellor combines the Rook and the Knight, completing the symmetry. My Chancellor is supposed to meld those two pieces visually as well, but I'm told it looks it bit more like the Majestik M00se. 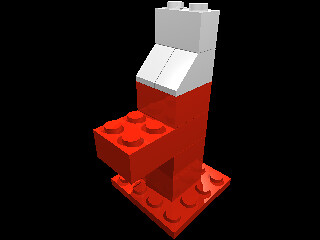 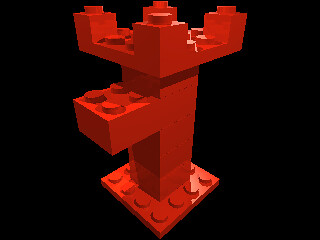 Finally, there's a piece in the chess variant Ultima called the Chamelon that moves and attacks like the piece it's attacking. You can play a game of Ultima with an ordinary Chess set, and represent the Chameleon with a Bishop, but the whole point of using Lego is to build unique pieces. I built a multicolored Chameleon out of Lego bricks, but now I wonder how to represent the red and black sides with it, since it's neither red nor black already. Perhaps it should have a red or black cap on its head, and of course its face gives it directionality, like a Shogi piece. 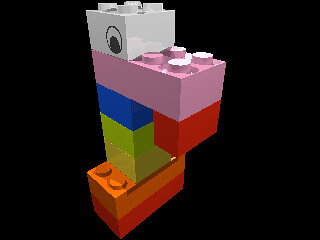 That's it for my chess variant pieces so far. Next up I plan to build the rest of the Ultima pieces. I already have Kings and pawns, as well as the Chameleon, but that leaves the Withdrawer, the Long Leaper, the Coordinator, and Ultima's most powerful piece, the Immobilizer.

Meanwhile, I just got a huge package from Amazon, so I may play with that for a while. A pirate ship would have been a great thing to bring into the freewheeling Lego miniatures wargame I played on the Fourth of July using the Politics By Other Means rules. Did you know a laser is useless against zombies, but a sonic beam will shake apart a skeleton?

Here's how out of touch I am with What The Kids Are Doing: it's actually easier for me to build a CAD reproduction of one of the chess variant pieces I've already built out of LEGO bricks, and then render it in Linux entirely with command-line applications, than it is for me to figure out how the hell my cell phone camera works. Then again, maybe it's Asperger Syndrome.

Here's a rendering of the chess pawn I designed. I've also built all the other usual Chess piece types out of LEGO bricks, as well as a few variant pieces, such as the Archbishop and Chancellor from Capablanca Chess, and the Chameleon from Ultima. All of my chess variant pieces are designed to use only the simplest and most common LEGO pieces, such as what you get in the Big Blue Tub. They are also designed to be small enough to be playable on a regular chessboard, and to be affordable to make. These last two features distinguish my pieces from all the other LEGO chess sets I've seen, some of which have king heights in the neighborhood of 18 inches, to judge from photos.

I'll upload more piece images later as I get the chance to render them.

I hear the LEGO people are quite touchy about fans posting original LEGO art, so let me say now that I have no connection whatsoever with The LEGO Group, LEGO.com, or any trigger-happy, clinical paranoids that, erm, just happen to work in the LEGO legal department. Not that I'm saying any do, you understand.

I don't expect this utter absence of connectivity to change in the near future or even geological time, but if it does, I'll let you know

Just cleaning out my hipster PDA...

Any sufficiently advanced metagame is indistinguishable from Nomic.

Marty and I each bought an XO computer from the 2007 Give One, Get One program of the One Laptop Per Child project (OLPC), making us a G2G2 family. Her sister Meredith's family bought three, bringing our extended family to exalted G5G5 status. :) Our computers are supposed to arrive by January 15.

On Sunday, 30 December, I attended the first meeting of the Seattle XO User Group with my friend John Braley. I estimated 40 attendees, of whom roughly 75% already had their own XOs. Because G1G1 is a charitable program and apparently for legal reasons can't be held year-round, I will probably never see so many XOs in one place again, at least so many XO-1s, or first-generation machines.

This picture is courtesy an anonymous SeaXO photographer, possibly Chris Altwegg, who blogged the meeting. I'm the big guy in gray, gesturing. The guy next to me leaning over is named Yen (sp?) and had two XOs. Since John and I were some of the few people at the meeting not to have an XO yet, he lent us one of his for a couple of hours. It was great! Thanks, man!

John and I played with a number of XO features, but the one that fascinated us the most was ebook mode; most other people were playing with collaborative mesh network features. The XO makes a great ebook reader. We noticed a small bug: the arrow buttons still think the screen is in laptop mode when it's rotated into ebook mode, so you have to press what is now the right arrow when you want to scroll down. However, the arrow buttons are all physically in just the right place on the faceplate ergonomically, unlike the Amazon Kindle, which reportedly often gets powered down by accident -- and software can be fixed, unlike the Kindle's button placement. Oh yeah, the XO is free of Amazon's shitty DRM too.

John likes to read in the bathtub and I like to read while waiting for the bus, so the waterproof quality of the XO would make it ideal for both of us. At about three pounds, the XO is a little heavier than I thought it was, but superb ergonomics still make it very comfortable to hold, so I look forward to reading in the Seattle winter rain -- something I can't even do with a "real" book! -- Real Soon Now.

For more information on the capabilities of the XO, read this terrific blog post or watch this terrific video. Or both. Then G1G1 next Christmas!
Collapse